I’ve recently read a couple of books related to naturism and nudity, and specifically to the idea of immersion: in water, in nature, in social nudism.

Janet Lembke’s Skinny Dipping (University of Virginia Press, 1994) is a collection of essays revolving around the theme of nature and human nature, or as the subtitle says, “and other immersions in water, myth, and being human.” In the introduction, Lembke presents skinny-dipping as a metaphor for immersion, whether in water or in ideas – as a way of inducing open exposure to a given experience. She recalls a childhood episode in which kids in the hot sun, and temporarily ignored by their parents, resorted to removing their clothes and playing in the birdbath. She concedes that the episode might have been forgotten were it not for the terrible over-reactions of most of the adults, which served to sear the event in her memory: “At that time in my life, even if the adults had tried to explain their objections to the coed nature of our skinny-dip, they’d have succeeded only in creating more bewilderment. Modesty, immodesty, exposure of private parts–these concepts had no meaning” (3). She attempts, in her writing, to reconnect with that “splashing, giggling , squealing child who knows without thinking that bare skin and water go together as wings go with air, roots with earth, and the phoenix with incendiary sun” (4).

The title essay on skinny-dipping starts out in the ancient Roman Empire, with an imagined day-at-the-beach, day-in-the-life of Pliny the Elder and his slave. To Pliny is attributed the line with which Lembke opens her essay: “This element–water–does not properly receive us unless we are naked.” At the Mediterranean shore, Pliny makes observations and asks questions, which his slave writes down, and then begins to wonder about the ocean. According to the author’s rendition of him, Pliny fears the sea due to his experience with shipwrecks and drowned sailors. But the salty spray tempts Pliny to enter the ocean, and he finally gives in, “dropping fears on the sand along with sweat-drenched clothes” (13). Lembke expands Pliny’s quoted  message to mean: “Stripping off not caution but the stale, crusty garments of preconception, peeling sensibility down to raw, new nakedness, is the only way to enter and be properly embraced by the world” (13).

The remembrance of Pliny is followed by a brief, present-day epilogue in which the author and her husband regard skinny-dipping as the time “to get exhilarated.” In a beautiful paragraph, Lembke describes the rejuvenating experience: “The water covers heat-stung nakedness as comfortably as scales and coaxes our arms and legs into an almost forgotten response […] Our boneless shadows skate over the sunlit sand below. It is as if we have begun to dissolve, to return to an element once our only home” (14).

Lembke’s skinny-dipping in an isolated pond contrasts jarringly with the crowded nude beach of Mexican writer Homero Aridjis’s novella, one of several short texts in a book of the same name, Playa nudista (Editorial Argos Vergara, 1982). The narrator is a young Mexican man who, finding himself with a few extra days in the Netherlands, decides to visit a nude beach. Refreshingly, there is no negative emotional threshold here – no conditioned sense of body shame that the man must struggle to vanquish. We don’t know much about his past, or whether he has much experience in this regard, but he simply removes his clothes nonchalantly. 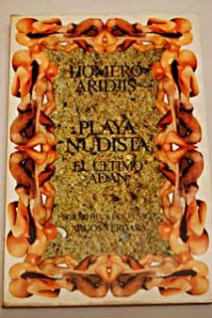 Unfortunately, the slim plot must hold together on the basis of the man’s happenstance meeting with a young woman at the beach. They flirt, they have a brief fling in her apartment, he looks for her in his remaining time, and finally finds her back at the beach with another man. It’s one of these stories more about ambiance and tone than about plot or character development. What is noteworthy is that the narrator describes the nude beach denizens candidly – his immersion, so to speak, happens not in the sea of saltwater but in the sea of flesh all around him. Even so, some of the descriptions are rather sordid, and I wonder if, given the time and place of publication, this was intended simply for shock value. One of the less sordid passages describes his first experience at the beach (below, with translation matching the low discourse level), but could also describe the book’s cleverly kaleidoscopic cover art, in which symmetric haunches haunt the book’s borders.

[And as if in a pleasant landscape of human flesh in repose, bathed in the soft morning light, he saw here and there backs and thighs like logs, asses like pears, bellies like flowers, tits like moons and buttocks like plates.
And perhaps because of this vision of three elements that don’t know how to wait: water, air, and flesh, he felt full of enthusiasm and walked among the nude bodies as if he were strolling through a part of paradise.]

Anatomical vocabulary aside, there is no denying the twin feelings of belonging and liberation that overcome many of us in such experiences of immersion. The body of flesh and the body of water become part and parcel of the same encompassing experience, an immersion strongest when nude.