Mark Haskell Smith’s exploration of the world of social nudity, Naked at Lunch, is an important book for you, no matter where you are on the nudity-textile spectrum. Why? Because he wrote about it from the perspective of a “reluctant nudist.” His tone throughout the book is refreshing – not skeptical, really, but certainly objective. It’s the tone of one who is willing to explore, to seek out empirical answers, one who is willing to question societal practices and customs regarding states of dress and undress. And on his many adventures from California to Florida and from the Caribbean to the Mediterranean, Smith finds that most of the time, naturist ideas are convincing. 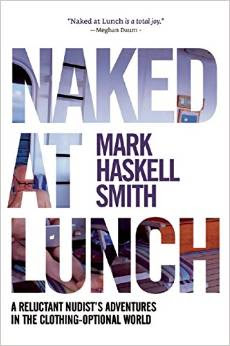 How does Smith, as a “reluctant nudist,” learn what these naturists ideas are? He researches naturists of the past, and he interviews naturists of the present. The reader of Naked at Lunch learns concisely about early nude societies such as Charles Crawford’s short-lived Fellowship of the Naked Trust; early 20th-century European nudist pioneers such as Richard Ungewitter and Emile Armand and their compelling manifestos; and a wide-ranging alphabet soup of organizations and events that encapsulate concrete moments in the history and expression of social nudism: AANR, TNS, YNA, WNBR, WNGD, NEWT, OCTPFAS, even FEMEN and FFF. He profiles the careers and legacies of TNS founder Lee Baxandall, for example, as well as early ASA (AANR) leader Isley “Uncle Danny” Boone. He interviews renowned TNS naturist philosopher and writer Mark Storey, YNA co-founder Felicity Jones, Naktiv founder Richard Foley, and Bare Necessities Travel co-founder Nancy Tiemann. He cites published body theorists like Ruth Barcan and Mario Perniola. He peruses the pages of naturist history at the American Nudist Research Library at Cypress Cove. He compares and contrasts the laid-back, family-friendly tranquility of Vera Playa to the naturists-vs.-swingers tensions of Cap d’Agde. He even interviews San Francisco district supervisor Scott Wiener about the nuances and ironies of the recent and much decried ban, led by Wiener, on public nudity in that city. The graphic below, by Björ (@IbanSaram), can be used effectively to illustrate the scope of Smith’s interactions across a spectrum of attitudes and activities related to social nudism.

Here is an example of Smith’s writing, from his frank assessment of his first social nudist experience. It’s a moment when he is apprehensive about social nudity, about being a single male, about where to look, even about having slathered too much sunscreen on his now-shiny penis… and yet:

“I went back to my chair by the pool [at Desert Sun Resort]. Was this a more enjoyable experience than sitting by a pool and reading with a swimsuit on? If I’m honest, I have to admit that it was. It felt good to let the sun and the warm desert breeze dry my skin after a dip in the water without the feeling of clammy fabric sticking to my body. Admittedly it was strange to look around and see naked people, but they were doing a pretty standard version of what people on vacation do, reading or snoozing or drinking cocktails and laughing–all in a nonsexual way, naturally. Nobody gawked, nobody said anything offensive or racy, it was all very proper” (p. 45).

In this passage, he asks himself a key question and then responds with honesty – this is a technique he employs throughout the book and, as I say, he almost always comes to the conclusion that naturist practices are laudable and correct.

Smith begins and ends the book with an account of his experience on a nude cruise. He builds suspense with frequent references to his wife being singularly unimpressed, or slightly bemused, when learning via Skype of his naked adventures… until she too, finally, aboard the cruise, decides to participate in social nudism, slowly at first and then more wholeheartedly. It is a strong endorsement. And yet in the final brief chapter, even after asserting that nudists are brave for simply admitting that they enjoy the sensations of the elements on their bodies, and even after asserting that society needs to grow up, accept nudity, and designate more areas for nude use, Smith still states, “I wasn’t a nudist when I started this journey and, if I’m being truthful, I’m not a nudist or a naturist or an anti-textile now. Not that I think there’s anything wrong with those labels. They’re just not my scene” (p. 297). But he does add the caveat that his attitude has definitely changed–to something like nude-friendly, and that even though he won’t go out of his way for a nude experience, he says, “if I ever find myself on a secluded beach somewhere, or if I’m hiking through the mountains and there’s no one around, or if my wife wants to sit outside at night and share a bottle of wine in the buff, then, if the weather’s nice, fuck yeah, I’ll be taking my clothes off. It feels good” (p. 298). These are the last words of the text – a simple and universal truth, the grand conclusion that we naturists strive to help people reach: it feels good.

I appreciate Smith’s playful style and ear for assonance in describing the process of reorientation with one’s body, with others’ bodies. He clearly relishes the chance to deploy words like buttocks and penis with the frequency that the subject matter affords. I also appreciate his placement of the Naked European Walking Tour episode right smack in the middle of the book, with a small reprise at the end: it’s an episode rich in a range of emotions and attitudes toward nudity–something of a panoramic view from an Alpine summit–and his respect for Foley and his fellow hikers is palpable. Mostly I appreciate such a well-written, well-researched, fun-to-read and up-to-date book about a topic I hold dear. I highly recommend it.

2 thoughts on “Naked at Lunch”