Skip to content
Happy December! It was around this time some years ago that an interesting cyclist began circulating the city streets where I live. He was such an attention-grabbing character that he rode off the streets and right into my novel, Co-ed Naked Philosophy. Here’s part of a passage from the novel featuring the Naked Santa Cyclist:
Dr. Tabitha Lasseter-Peebles, her pressed outfits hanging from the hook inside the backseat passenger’s door, pulled out of the drycleaner’s parking lot into traffic. A crimson flash caught her eye as she drove through the intersection.
Was that Santa Claus? On a bicycle?
But he had no beard, no belly…A clean-shaven man, maybe East Asian or Native American, middle-aged, his wide-open Santa jacket flapping in the wind, rode along bare-chested in red pants and black boots, with a cardboard sign attached to the back of the bicycle seat: WILL SING NAKED 4 $1. He waved and smiled through the rush-hour traffic, weaving through the buses as they pulled away from the curb in front of the high school. She lost sight of him for a few hundred yards as she advanced toward the next stoplight, only to see him again in her rearview mirror as he pedaled determinedly up the hill. Sweaty Santa. Stinky, sleazy Santa. Other drivers whistled or shouted while teenage pedestrians repeated the words on the sign over their cell phones. But no one stopped him to sing.
Tabitha chuckled in spite of herself. Why so cheap, she wondered, beginning a line of philosophical questioning. What will he sing? Does he take requests? Where will he sing? On the street corner, it would seem? Or under what sordid conditions? Isn’t he cold? Does he mean that he’s already naked when he starts to sing, or that he strips while singing? Is it some television spectacle, or sociology experiment, to see how people react? Is he near the high school on purpose? Would the police stop him merely for riding around with that sign? But surely that is not illegal. Is he new to this country? Where on earth did he get this idea? A one-man-show version of Naked Boys Singing? What if I persuaded him to change the sign to WILL TEACH PHILOSOPHY NAKED 4 $1? Does he really think he can make money this way? Above all, will anyone take him up on it? Who, and why? On a whim, she rolled down the window.
“Hello? Umm…excuse me?”
The light turned green. Quickly she scanned the businesses ahead. She fired her eyes at him a little too intently. “Meet me at that Frostee Fort, will you? I’m going to pull over there.”
The Santa cyclist smiled and nodded as the driver in the car behind Tabitha’s honked the horn.
After she had parked in the restaurant lot, she checked her hair and teeth in the rearview mirror by force of habit. Soon Santa had pulled up beside her window. He stayed astride the bike with his feet on the ground.
Tabitha remembered to smile. “Hi.”
“Hello.”
“Why…why are you doing this?”
“Why not? Is it illegal?”
“I don’t know, don’t you?”
“I don’t think so, not advertising. If I stripped and sang on the street, well, then there’d probably be trouble. But I still don’t know that would be illegal.”
“Do you know Christopher Ross? Did he put you up to this?”
“Who?”
“Christopher Ross. I work with him.”
“Never heard of him.”
Tabitha believed him in spite of herself.
“Ma’am? Are you going to request a song?”
“No, sorry.”
“Half-price. Two for one. C’mon, at a dollar a song I’m practically giving myself away!”
Why so cheap, Tabitha wanted to ask. “No, I…”
“Look, you asked me to pull over here. What’s the deal?”
He wants me to pay him to expose himself completely. Completely: both body and singing voice. “OK, OK, look, I’m going to pay you for your time. I’ll pay for three songs, but I don’t want you naked or even singing. Just tell me, where do you go to perform?”
“You have to tell me.”
“What?”
Santa took a deep breath. “I don’t know. I was hoping you could tell me a public place where nude singing is not a crime.”
Having no answer, Tabitha fumbled through her purse for the three dollars.
“So, is this a great country or what?”
“Thanks for your time.”
Santa hesitated, as if he didn’t want to take the money, on principle, but he finally did take the bills and said, to justify the act, “Well, time is money, they say.”
“Bye.”
Tabitha rolled up the window and began to pull forward, but Santa rapped on her door. She stopped and rolled the window halfway down.

“What?” She looked quickly to verify that her car doors were locked. Santa had remained calm and held no weapon she could discern.
“Open up, lady. Give of yourself. You know you want to, or you wouldn’t have stopped me.”
“Yeah, right. Thanks.” This thrills-for-bills Santa thinks he’s giving me a lesson.
The window had almost sealed when she heard, “Merry Christmas!” 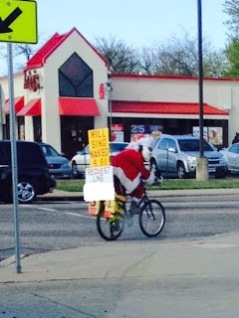