I’m very grateful to my friend Bernard Perroud, who surprised me by sending me his original painting for the cover of Aglow! 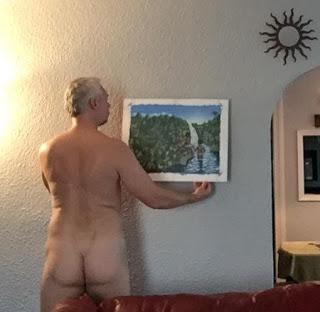 Bernard is a very talented multi-media artist. I’ve always enjoyed his aesthetic and his willingness to show his work in progress. I collaborated with him for the cover of my first novel as well–Co-ed Naked Philosophy–and I featured some of his work in a post on this blog. It is such a pleasure when an outstanding artist helps bring the story to life!

So, what’s happening in the painting…? Without any spoilers, I can reproduce here the passage from Aglow that corresponds to the scene in the cover art. The speaker in this passage is an indigenous woman from the Amazon, and she is giving testimony to a Jesuit priest in the newly founded city of São Paulo in 1554…

In fact, the first time my mother saw my father, they were underwater. He had approached the lake and had seen that she was gathering reeds from the lake bottom. Somehow he was able to slip into the water undetected. He waited for her to see him, then smiled, bubbling, and held out his open hands under the water and started kicking his legs like a frog. She understood that he was friendly, not like that other man that tried to surprise her.
But then she saw behind my father what he had not: a caiman, closing in on him, its jaws already open. It wasn’t the first time. She knew this caiman, and she knew what to do. She pushed my father to the side, and at the same time she kicked the animal just under its chin.
I mean to say that she knew this animal because she had already had encounters with it. They lived in the same lake. It is only natural. And she had learned how to get the animal to leave her alone. So, as I was saying, she kicked the caiman, and he spun back from the force of her foot. My father instantly saw what had happened, and just as my mother swam in to kick it again, my father grabbed one of the reeds that my mother had left floating in the water. He swam on top of the beast and straddled its back with his legs. The caiman started whirling around in the water but my father threw his chest over the animal’s eyes, which confused it, and then looped the reed around its snout, and quickly tied it tight. The caiman could not open its mouth. It swung its head back and forth, trying to get loose, as my mother and father swam quickly to shore.
Well, Your Grace, I don’t think I know what you mean about miracles. My mother said it was because the caiman was surprised by my father in his lake, and was defending his territory. My mother had made her peace with the animal long before, when she first came to the lake. This is how it is when the land and water are shared the right way. By the time the caiman broke its jaws free of the reed, my parents had already swum to shore and moved away from the waters. And my mother found that my father had already placed on the strand a large pile of the reeds that he collected for her, before she had even seen him. She was very impressed by his tricks.
It was not many days afterward that my mother dove again to the lake bottom, but this time to collect the clay to make the muiraquitã amulet for my father. When she told me the story, she said she had the intention to make the muiraquitã in the form of a frog, because my father had reminded her of a large frog when they met underwater. But in the end she chose the form of a caiman, since she and my father had worked together to defend themselves but also to share the lake with the caiman. One day she gave the muiraquitã to him, in the lake, near the waterfall that is one of the voices of the lake.
Then my father wanted to make another voice, to make holes in the amulet, to blow air through it with his mouth. But he left it as it was, since it had been a gift from my mother, to stay near his own voice when he wore it around his neck. Instead, he began to fashion other clay figures with holes, and to blow through them for sound, like what you call, I think, music. Sometimes he made them in the shape of frogs and caimans, but also pirarucu fish, or piranhas, or turtles, and sometimes people. This is something that he taught to the others who lived in their group, people like Yari and Zahua. Zahua became very skilled at shaping the clay into these musical amulets, although he did not know how to make the same from gold. His sister Yari learned how to blow their music and put together their songs. She made many songs, for fishing, for hunting, for dancing, for healing. And when it was time for my mother to bring me into the world, Yari and Zahua helped my mother and father and others at the lake to craft the circle and its song – the circle you have taken from me. You do not know its voice, its song. They combined what they knew about bringing people into their homes of this world, and bringing music into the world, and led the whole community to bring me into my home of this world.

Here is a close-up from Bernard’s painting of the caiman-shaped muiraquitã, a traditional Amazonian amulet made of clay from the bottom of a river or lake: 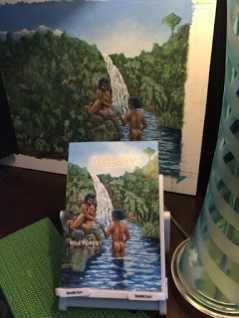