Far from supposedly protecting the innocent or the easily offended, pixelization on TV or in the movies actually increases prurient and overtly sexual interest in the body. Can there be any doubt that the TV networks and the government don’t realize this? Of course they do: sex sells. Bars or spots covering the breasts, buttocks and genitalia in diverse print media have the same function. As everyone knows, one of the best ways to sell a book is to get it censored or condemned by some church or organization. Pixelization works the same way. It literally makes a mystification of the body by blurring body parts in a fuzzy mist, and this is how it reinforces the belief that certain parts of ourselves, just by being seen, can corrupt us morally or incite us sexually.

Talk about a self-fulfilling prophecy! If there is any truth to this Power-of-the-Nipple or Power-of-the-Penis notion at all, it obtains precisely because of the media’s insistence on pixelization. The media thus sexualizes contexts, with stripping and teasing and peekaboo, that would not otherwise be so. Another example: cleavage, or the presentation of the breasts pressed tightly together. This look depends on tight garments, which means that it is impossible to maintain when nude. The cloth hides the nipples and areolas, while emphasizing the volume and aperture of the breasts. So the look is fetishized precisely because it is an artificial arrangement of exposed flesh designed to appeal sexually. (Codpieces and certain tribal groin accoutrements have the same function with regard to the penis.) Cleavage is designed to draw the gaze to a gap–the space between the breasts–just as pixelization also presents a gap or missing space on the body. Both cleavage and pixelization produce a lack, a mystified space that sells and incites and awakens prurient curiosity. In contrast, nudity demystifies, failing to fulfill these gravity-defying fantasies. For that reason, nudity facilitates comprehension of the real shapes of ourselves in our bodies. 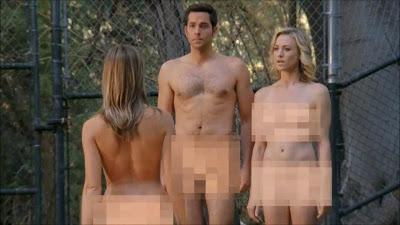 Mere (yet essential) nudity rends the veil between supposedly noble parts like the head, arms, or hands and supposedly ignoble parts like the buttocks, penis, and breasts. Working toward a complete humanity means overcoming these false dichotomies and fetishizations. To be clear: sex is great, sexual contexts are an integral part of our humanity, and nudity can be sexual, just like fully-clothed contexts can be sexual. But the hypocritical media titillate (creating a charged sexual context) when they pixelize (purportedly acting morally to censor sexuality). If we persist in creating hide-and-seek contexts for censoring and incessantly fetishizing certain parts of ourselves, then the detrimental consequence will be greater fragmentation between ourselves and our understanding of ourselves. Partial humans yield partial humanity. In other words: no half-assed contextualizations. It should be the whole ass, or nothing!